Bone donation is yet to catch up among Indians. 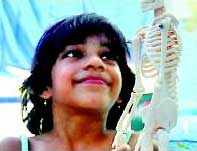 Even though globally, bone is the second most commonly transplanted tissue, after blood, not many Indians have come forward to pledge their bones. And this is taking a serious toll on the country’s only full-fledged bone bank at the All India Institute of Medical Sciences.

“Not every bone from the body is taken. We just remove bones from the lower limb – two thigh bones, shin bones and pelvic bones. Other bones like the spine, skull bone, feet and angle bones, collar bones and shoulder blades are left intact,” he added.

According to experts, donating bones also does not disfigure the body. “We meticulously reconstruct it with wood and synthetic wool. There’s no disfigurement. All that is visible are the stitch marks. People wrongly think that once the bones are removed, the body would look mutilated,” Dr Malhotra said.

Over 30% of patients undergoing complex surgeries – tumour surgeries, failed replacements, spinal surgery and massive bone loss following trauma – require bone transplant. In countries like Australia, bone donation rate is 4 out of 100,000 population while in US it is 2. India has an abysmally low rate and at an average, the bank does not even get a single donation a year.

“The good thing is that bones when kept at -70 degree centigrade can be used for five years. We usually take donations from patients who have reached skeletal maturity -- 17-75 years old. We avoid taking bones from people older than 70 as they could have hidden cancers,” Dr Malhotra said.

Operations performed using the banked bone have recorded 95% success with no extra cost to the patient. Bone transplant specially helps patients with massive bone loss due to road accidents and bone tumours, facing possible amputation of the limbs. According to Dr Malhotra, a donation of lower limb bones can help 15 people. After death, they are collected within 12 hours if the body is kept in room temperature and within 48 hours if kept in air conditioned room.

“At present I have two patients waiting for an arm bone – from shoulder to elbow – but we don’t have it. We reshape the donated bones and fit it into the defect. We sometimes use them as pastes to fill up cavities,” Dr Malhotra added.