Cancer Patient Takes on Govt For Investing in Tobacco Firms

30–yr–old smoker, who has lost a major portion of his tongue to cancer after undergoing three surgeries, issues fervent plea not to encourage tobacco firms by investing in them
As a pharmacy professional, 30–yr–old Tali Kamsi from Arunachal Pradesh is not too conversant with investments, balance sheets and other financial matters. But of late, Kamsi, who is recuperating from a tongue surgery at Tata Memorial Hospital in Parel, is busy poring over shareholder information of a tobacco company while dashing off letters to the government. 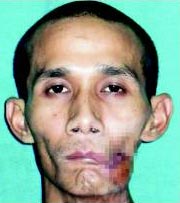 “Why and how do our government–owned companies invest so hugely in Indian Tobacco Company?” is what Tali asks in gestures, lying on the hospital cot. After the third surgery, which has left a major part of his tongue removed, his speech is quite incoherent and his mother, Kengam, played interpreter when Mumbai Mirror met Tali.

Tali, who says he started smoking when he was 22 years old, has tongue cancer. He has already undergone two surgeries at a hospital in the capital of his home state hospital, Itanagar.
Only recently he has written to Union Finance Minister Pranab Mukherjee, seeking to know why government firms park their investment in the tobacco company.
His letter to the finance ministry reads: “I have learnt that government–owned companies are among six op 6 shareholders in Indian Tobacco Company.
The copy of a financial statement attached to the letter notes that Life Insurance Corporation, Unit Trust of India and other agencies are funding a cigarette–making company… Tali’s letter lets out a gentle admonition about how smoking causes cancer, leads to heart attack and a host of other diseases.

“Why is our government investing so much in this domain?” asks Tali, who has also lost his lips and lower jaw to the scalpel. Tali and his widowed mother are presently in the city to attend to his treatment. His wife is back home in Arunachal with their six–year–old son. “I’ve already undergone three surgeries and the doctors have said that I might also need a fourth one,” said Tali, as a slight tear glistens the corner of his eye. “The doctor have also warned me that I could lose my life. And all this is due to my smoking habit.”

Doctor’s advice
The medical fraternity too is shocked at the government’s investment preferences. “We have learnt that Life Insurance Corporation invests in Indian Tobacco Company and other tobacco firms,” said Dr Pankaj Chaturvedi, associate professor of head & neck department at Tata Memorial Hospital.

Dr Chaturvedi, who is associated with Voices of Tobacco Victims, a support group of cancer survivors, said the association had filed a right to information query during which this information had come to light.