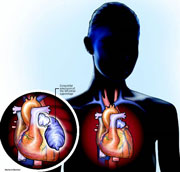 The health complaints of Ghatkopar resident Rosy D’Souza (26; name changed) seemed simple: breathlessness, loss of appetite and weakness. But their cause was rare, with only 75 documented cases in medical literature. A part of her heart had ballooned into a blood-filled sac almost as big as the organ. The condition is called congenital aneurysm of the left atrial appendage (LAA).

The LAA is a muscular pouch connected to the left atrium, one of the heart’s four chambers. As the term appendage suggests, the LAA does not perform any significant function. "(It resembles) a handle (and) is believed (to) help the heart muscle contract and pump out blood," said cardiac surgeon Dr Mahesh Singh, who operated on D’Souza a month ago at Fortis Hiranandani Hospital, Vashi.

D’Souza’s LAA started filling up like an elastic balloon. "When we (started the surgery), for a minute it seemed she had two hearts," said Dr Singh. "The aneurysm had become almost as long as the heart itself."

The extra growth restricted her heart’s movements, leading to symptoms akin to heart failure. The surgery, performed on May 11, took three hours. "My father was so worried that he refused to come to the hospital," said D’Souza, who works at a private firm; the company footed her medical bill.

D’Souza’s symptoms began a year ago. She was treated for cold, cough and other infections, including tuberculosis when an X-ray showed fluid accumulation near the heart. She was on medication for TB for nine months. Since the symptoms persisted, she was referred to a cardiologist, Dr Sandip Rane, who has a hospital in Chembur. "We put her through a series of tests—from MRI of the heart to a special echo test—before realizing that we were looking at one of the rarest cardiac complications," said Dr Rane.

He believes D’Souza was lucky to have escaped a medical emergency. "In TB treatment, doctors usually take samples of the fluid contained in the affected area. Had this been done with D’Souza, it would have ended up puncturing the aneurysm, triggering the emergency," he said.

D’Souza was aware of the seriousness of her condition. "I knew it was unusual, but I had faith in my doctors," she said. Her only request to the doctors was to keep the incision on her chest as small as possible.

"We operated on Rosy without strapping her to the heart-lung machine, using the beating-heart technique to fix the problem. This helped her recover faster," said Dr Singh.

Heart surgeon Dr S Bhattacharya from Bombay Hospital said an aneurysm of the LAA is rare, "but is not clinically difficult to fix".

The Affliction
Congenital aneurysm of the left atrial appendage (LAA)