Family Strife Key Cause of Suicides

Widespread Concern As Police Data Shows 528 Out Of 1,192 Deaths Last Year Were Due To Familial Problems


Worryingly, the primary cause for suicidal deaths in the city, according to the police, is “family problems”, followed by mental illnesses.

The data was provided by the senior police superintendent of the crime branch’s main computer cell in response to a Right to Information application filed by social activist Vihar Durve. In the plea, Durve sought an age-wise break-up of the suicides from 2001 to 2010 besides their causes.

The figures, Durve said, proved that high stress levels and difficult living conditions in the city are putting immense strain on its residents. He has now written to chief minister Prithviraj Chavan. “It is important for the civil society and state functionaries to find ways to check suicides,” he said.

“It is the youth’s incapability to handle the urban angst that forces them to take extreme steps,” said sociologist Nandini Sardesai. “They are overwhelmed by their emotions. They do not want to see the options available.” 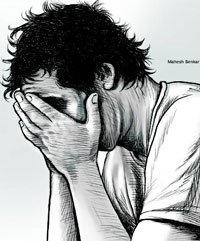