For the Union health minister Ghulam Nabi Azad, men having sex with men (MSMs) is not only “unnatural” but also a “disease”.
According to Azad, “this disease has come to India from foreign shores”, and Indian society needs to be prepared to face it. Unfortunately, he said, the number of “such people” is increasing by the day.

In statements made while addressing zilla parishad chairpersons and mayors on HIV/AIDS on Monday, Azad said, “The disease of MSM is unnatural and not good for Indian society. It’s a challenge to identify such people. In case of female sex workers, we can identify the community and reach out to them since they live in clusters. But in case of MSMs, it isn’t always possible.” These comments have not only caused uproar among civil society, but also in the National Aids Control Organization (Naco), which incidentally reports to Azad. “How can this be a disease? It is just a form of sexual orientation. It’s definitely not unnatural,” a Naco official told TOI.

Naco has been working towards identifying MSMs and giving them a rightful place in society. A large number of targeted interventions (TI) have been put in place by Naco to specifically cater to the needs of the MSM community. According to Naco’s latest surveillance data, India is home to an estimated 4.12 lakh MSMs of whom 2.74 lakhs have been identified. 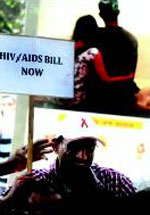 An activist at a protest march in New Delhi on Monday seeking tabling of the AIDS/HIV bill
Around 4.2% of all sexually-active males in India are believed to have sex with other men, with Chennai, Andhra Pradesh, Gujarat, Tamil Nadu and Orissa reporting the highest number of such cases. Of the total number of 1,511 TIs, 168 exclusively cater to MSMs. Each TI, catering to 1,000 MSMs, cost Rs 15 lakh.

The 2010 UNAIDS report on the global AIDS epidemic found that among the high-risk group that got HIV infection in India last year — 9.2% were intravenous drug users, MSMs (7.3%) and female sex workers (4.9%).

“MSMs are those who are involved in very high risk sexual behaviour. They usually have sex with multiple partners. Some are also involved in commercial sex activities,” the report said.

Till now, a single TI would cater to MSMs and transgenders. Now, Naco has decided to have separate interventions for transgenders and MSMs.

Times View The judiciary may have decriminalized homosexuality but some policymakers clearly continue to regard it with distaste. Regarding the claim that it is unnatural, there is enough scientific evidence to the contrary. There are also plenty of references to gay sex in classical texts and art around the world. It is, therefore, disturbing, when a person as important as the health minister exhibits such prejudice. We earnestly hope it will not colour policy decisions that impact the health and well-being of a large chunk of the population.

In India, social stigma against HIV patients is tremendous, making it hard for the afflicted to get work.

Urging ministries to have a “HIV sensitive” policy and programmes so that the marginalized populations infected and affected by HIV/AIDS are not denied the benefits of these schemes, Singh, while inaugurating the national convention of zilla parishad and mayors on HIV/AIDS, said, “We have to ensure that there is no stigma and discrimination towards HIV infected and affected persons. No child should be denied admission in schools and colleges because he or she is afflicted with HIV or because his or her parents are afflicted with this disease.”

He added, “We must ensure that no person loses his or her employment because of HIV. We must see that there is no social ostracization. We should ensure that women are not doubly stigmatized.”

Union health minister Ghulam Nabi Azad too stressed on ending stigma against HIV patients.
An activist at a protest march in New Delhi on Monday seeking tabling of the AIDS/HIV bill