Govt's Ambitious Plan To Drive Up Cost of Ambulances

The state government's ambitious blueprint for an emergency medical service is making some see red. Its insistence on high–end imported devices, net worth of at least Rs 75 crore and Ayurvedic doctors to man the ambulances has prevented many from participating in the bid. On the eve of the tender bid's closure, only two players were in the arena.

Of course, when the government picks up the winner in the bid for the Maharashtra Emergency Medical Services (MEMS), it will unveil what could possibly be the world's biggest fleet of ambulances operating within a geographic area. London Ambulance with its 700–ambulances fleet will certainly be dwarfed by MEMS's 972 ambulances.

Last month, the state had to extend the bidding process for the second time because it failed to attract the minimum requirement of three bids. The first phase got three bids of which only one–GVK Group's EMRI–qualified. The second bid has two players–EMRI and Pune–based Emphasis group. "We are hopeful that more bidders will come in tomorrow (Friday)," principal secretary for health Bhushan Gagrani said. 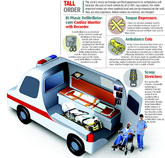 As per government rules, the second phase can be considered final even if there are not adequate bidders. "Getting through the technical details will require another week to 10 days," said an official.

But the state government's ambitious blueprint for MEMS–it requires the best available apparatus in the world with expensive pieces of certification from European or American government associations–has left many fuming. "On paper, the state is asking for the best available option. But this adds to the cost per ambulance," said a trauma–care specialist.

Consider the humble tongue depressor or spatula to check for sore throat: while Indian wooden spatulas would cost Rs 75 for a pack of 100, the European standards–compliant spatulas will cost Rs 750. Take the high–end life–saving apparatus called defibrillators that is used to revive patients with irregular heartbeats. The state wants defibrillators that can be mounted on the wall.

"As Indian manufacturers don't make wall–mounted defibrillators, the state will have to look at machines made by multinational companies," said an engineering consultant associated with one of the MEMS bids. The cost difference is huge: the Indian one costs Rs 1 lakh–Rs 1.5 lakh while the MNC make costs up to Rs 7 lakh each. Said a source, "Each vehicle will cost two to three lakhs more as a result." At present, the average cost of fabricating an advanced life support ambulance is Rs 11 lakh.

The government has an answer. "We wanted the best and hence chose AIIMS as our consultants. There have been pressure on us to dilute these stringent norms, but we want the best for our state," said state public health minister Suresh Shetty. He added that his government's tender documents were praised by health ministers from other states during a recent meet.

Moreover, the feeling is that the state is funding MEMS so the specifications shouldn't bother the bidders. "The Union and state governments together are funding MEMS. This is a service contract that the state is offering and not a partnership that requires their financial input," Shetty said. In other words, the government will pick up the tab–for manufacturing ambulances, maintaining the call centre, salaries, etc. "Every patient will be ferried free of cost," said an official.

MEMS is the culmination of about three years of planning. The acute need for an EMS was revealed during 26/11 when victims were ferried in handcarts from CST to the nearby St Georges Hospital. Advanced life support ambulances doubled up as hearses transporting bodies from Taj and Oberoi hotels to the JJ Hospital Morgue in Byculla.

The National Rural Health Mission decided to fund EMS in rural Maharashtra and chose Satyam–run EMRi to operate it. But the subsequent state government declared the tender–less choice of EMRi void and decided to start the process all over again. "The chief minister's office felt that the entire state and not just rural areas should have an EMS. Hence the government decided to fund the non–rural part of the EMS," said an official.

The tender was thus floated in August and amended on several counts based on feedback from bidders. "We were told several of the sophisticated machines we wanted were fit to operate well on smooth European roads but not in rural Maharashtra's roads," said Shetty. "But we want the rural population to enjoy the same comfort as others."

He said that one of the potential bidders had backed off on hearing that only Ayurvedic doctors could man the ambulances. "The bidder felt that getting doctors would up the running costs. But Indian laws state that only a doctor can perform emergency procedures and not paramedics like in foreign countries," Shetty said.

A senior trauma–care doctor pointed out that though Maharashtra has 40 Ayurvedic colleges, it would be difficult to hire and retain almost 3,000 doctors who would be needed to run such a service. City ambulance service provider 1298's officials said that their efforts to get clarifications to their queries had been ignored.