Indian parents often goad their babies to not grow up fast. If childhood is about magic, it is vanishing even before it is lived. In fact children are indeed growing up fast, speeding past the springtime of their lives, say psychiatrists who connect that to the falling levels of emotional quotient. The warm hugs, the tiny kisses, a ride on the Ferris wheel, a family camping trip, vanishing into a book with mum, playing chess against dad, are all now just cloying instances tucked away in fables.

“The EQ among our children is on the decline. They have a lower threshold for tolerance, they are easily depressed, their coping ability has reduced and complexity has gone up. Seven– and eight–year–olds talk of violent acts and of dying these days,” says psychiatrist Dr Nirmala Rao.

The new toys like Angry Birds, Crime Life: Gang Wars and other ultraviolent games don’t score too well in enriching EQ. Our cities’ kids–unfriendly design doesn’t help either: you need to go to a hill station even for a horse ride or to spend time under a waterfall.

Peggy Mohan, an English teacher with a Delhi school, says, “We are living in tiny cocoons. Our children are like aliens who’ve ventured into the adult space. They are as nice as ever, but they do not have the sense of the landscape they live in.”

A textbook on EQ records an experiment on two sets of children sitting in front of a bowl full of marshmallows. They are told that those who would wait can pick two marshmallows, and those wanting them immediately would have to be happy with just one. Those who waited were later tracked in life: they were happier, scored better in school and went on to have strong family bonds. CHILDREN’S DAY ‘Teaching children to wait is important’ Parents Should Discipline Kids, Not Just Empower Them: Experts Psychiatrists have pointed to the declining level of emotional quotient in children.

“Teaching children to wait is so important. But a Black–Berry is given as soon as it is demanded, then there is an instant ice cream, a laptop is handed out immediately after it is asked for. Instant gratification is bringing down the EQ,” explains psychiatrist Dr Harish Shetty.

Kids hold more power, less discipline; they order, but take fewer orders and PG (parental guidance) is just an inane abbreviation that pops up before some movies. “Children these days know that they don’t have to obey someone just because they are older or in a position of authority. While we would blindly follow the instructions of any elder including a teacher, an aunt, parents or even a neighbour, when we were young, children these days choose who they want to listen to,” says Krithika N V who teaches in a playschool in Chennai and is also a mother to two children aged three and eight.

Is parenting to be blamed for that? “Partly,” say experts. Mohan mocks at the idea; she says, “Parents are barely seeing their kids.” 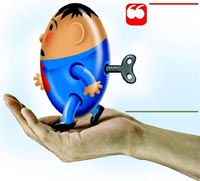 And the stayhome mums have denounced the soft cuddling style of parenting they were brought up on. Instead they are Amy Chua worshipers who put their kids through tough parenting. “Parents squeeze all kinds of classes into a day. Kids start going for swimming, but soon their parents push them to clock better timings. It’s about competing, winning, rarely ever about the joy of learning,” says a school head.

Schools have realized they are working with several students whose emotional ability is fractured and are trying to amend the situation. “We have been organizing events to increase interaction among students. We are also organizing a weeklong event called ‘dare to care’ to sensitize students,” said Jamnabai Narsee School principal Sudeshna Chatterjee.

At Indus International, Bangalore, children are put through community service from day one. Says principal Sarojini Rao, “The changing times and the exposure our children are put through, made us feel that the manner in which we are bringing up our children is wrong. In our times, we had moral lectures. They no longer work. So, we make our children work in orphanages, in public health centres, and without realizing they imbibe the virtues of love, empathy and respect.”

Children absorb from the culture, from the space around them. So, Dr Shetty adds that there are other ways to enrich their EQ. “The ambience matters; feelings should be spoken about generously, they matter more than thoughts.” (With inputs from Sharanya Gautam in Chennai)

On Children’s Day, TOI takes a close look at stories of children from very different sections of society who show a zest for life and the will to take on its challenges. P 20