8% of People in Mumbai, Thane Hit By COPD

In The Emperor of All Maladies: A Biography of Cancer, oncologist Siddhartha Mukherjee brought to the fore a disease that society and the medical world are still grappling with. But there is another disease that claims more lives than cancer; considered as dangerous as AIDS, its fatality rate is surpassed only by heart attacks, strokes and acute lung infections—Chronic Obstructive Pulmonary Disease (COPD). Described as a slow killer, COPD is fast emerging as an epidemic, affecting eight out of 100 people living in Mumbai and Thane district. The results of a city–based study show that the percentage of Mumbaikars and Thaneites suffering from COPD is much higher than the all–India figure of 4.1%. The culprit, say doctors, is smoking. 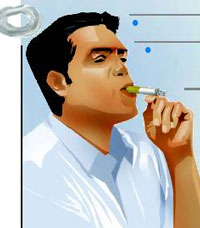 Researchers at the Indian Institute of Environmental Medicine

(IIEM) put the urban and rural

The most common cause of

of people who smoke risk the chance of developing COPD,” said IIEM director Dr Rohini Chowghule, a chest specialist who conducted the study on 500 men and 500 women above the age of 35 years.

Though the study reflected 2006 figures, city doctors say the incidence rate would have only increased in the last few years. One reason, say doctors, for the higher prevalence of COPD in Mumbai is the massive population. “There is a bigger population in the city, especially of those who smoke—actively as well as passively. This is the reason more people suffer from respiratory problems,” said Dr Ashok Mahasur, a chest specialist with Hinduja Hospital.

“Another problem is the environmental pollution in the city. Many Mumbaikars have occupational exposure to pollution and end up falling prey to COPD,” he said, adding that if repeated respiratory infections during childhood are not treated, they too can become COPD at a later age. 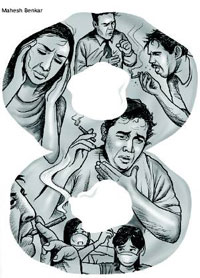 “For a long time, there are no visible effects of smoking. But over a period of time, the tubes of the air ways get inflamed. The person gets bronchitis, which is still reversible. If, however, the person continues to smoke, then the alveoli, which are tiny air sacs in the lungs, start getting damaged,” said Chowghule. There are about 300 million alveoli in two adult lungs and provide a surface area almost equal to the singles area of a tennis court. But with COPD, the elasticity of the alveoli is lost. The walls of the air sacs break, thus reducing the capacity and the surface area. “The air is trapped in these damaged alveoli. There is stale air in the lungs and one has to strain to breathe,” said Chowghule.

Biomass fuel is a health hazard

Another worrying aspect, say doctors, is the prevalence of COPD among women who don’t smoke. Studies show that women who have to use biomass fuel for cooking purposes are more prone to COPD. Dr Amita Athavale, head of the chest department at KEM Hospital, said: “It is not just a rural phenomenon. Even women in Mumbai slums and pavements use this technique for cooking purposes.” According to doctors, the morbidity is higher and gradual among women who use biomass fuel. “In the course of the disease, there comes a time when they cannot perform the most basic household chores and have to strain the abdominal and neck muscles to breathe. It is important that women are taught to maintain smokeless chulhas so that they don’t fall prey to COPD at a later age,” said Athavale.

Smoking is responsible for 90% of COPD cases. When a COPD patient stops smoking, the decline in lung function slows to the same rate as a non–smoker

It can cause problems for people with a lung disease, but it is unclear whether outdoor air pollution contributes to the development of COPD. In the nonindustrialized world, the most common cause of COPD is indoor air pollution, usually due to indoor stoves used for cooking

Some occupational pollutants such as cadmium and silica do increase the risk of COPD. People at risk include coal miners, construction, metal and cotton workers

Patients may develop cyanosis—bluish discoloration of the lips and nail beds—due to a lack of oxygen in blood They also may develop morning headaches due to the inability to remove carbon dioxide from the blood Some patients experience weight loss, primarily because of the additional energy that is required to breathe. Patients with COPD may cough up blood

Worldwide, one in 10 adults over the age of 40 may have COPD prevalence In India, the is 4.1% Worldwide, nearly 3 million people die from COPD every year According to the World Health Organization, COPD is the fourth leading cause of death worldwide, surpassed only by heart attack, stroke, and acute lung infections. It kills more people than cancer, and as many people as AIDS