The Plasmodium vivax strain of malaria, which had registered no deaths till December 2006, claimed two lives in 2007 and another two in 2008. All the four deaths were reported in Mumbai alone. In 2013, the same vivax strain claimed four lives — one each from Thane, Raigad, Pune and Nashik.

“We have been seeing patients with Vivax strains developing serious complications, which were otherwise seen with the falciparum strain. We see 3-4 cases of Vivax causing severe complications during monsoons, which is the peak season for malaria. The incidence is definitely on rise. The probable cause is chloroquine resistance and a high parasitic load,” said physician Atul Joshi of Sahyadri Hospitals.

Joshi underlined that after being given a full course (3 days) of chloroquine, patients should be treated with 14 days of primaquine therapy. But this is also where the problem arises.

“When treated with Primaquine, people having a deficient amount of the enzyme G6PD (Glucose-6-phosphate dehydrogenase) can develop complications like red cell destruction, leading to black urine and worsening of anaemia. G6PD tests need to be carried out before prescribing primaquine,” Joshi said.

The G6PD analysis test, however, is not readily available. “That is why doctors have reservations prescribing primaquine. Patients treated only with chloroquine may have dormant malarial parasites in their liver. This could cause a relapse which, in some cases, leads to severe complications,” he said.

Joshi added that patients should also be treated with a second-line therapy, like mefloquine and artesunate, incase chloroquine resistance is observed.

According to the WHO report, parasite resistance to chloroquine has been confirmed in 10 countries so far, while a total of 13 additional countries have observed treatment or prophylactic failure with chloroquine.

Internal medicine expert Abhijit Joshi of Joshi Hospital said there has been a rise in cases of severe complications caused by the vivax strain in the last four to five years.

“The vivax strain of malaria has become increasingly resistant to chloroquine. Besides, inadequate treatment results in inadequate eradication of malarial parasites from the body, leading to relapses. Certain studies have suggested that there is a genetic predisposition, but we need robust studies to validate this claim,” Joshi said.

According to Renu Bharadwaj, head of the microbiology department, B J Medical College and Sassoon General Hospital, the severe, fatal and drug resistant vivax malaria has challenged the perception of P vivax being a benign strain.

“Studies from Indonesia, Papua New Guinea, Thailand and India have shown that 21 to 27 % of patients with severe malaria have P vivax mono-infection. The clinical spectrum of these cases is broad with an overall mortality of 0.8% to 1.6%. Major manifestations include severe anaemia and respiratory distress among others. Drug resistance in P vivax may be associated with increased virulence,” said Bharadwaj, who is also former president of the Indian Association of Medical Microbiology and section editor of the International Journal of Antimicrobial Agents.

State surveillance officer Pradip Awate emphasised on taking complete radical treatment with primaquine to avoid complications. “Avoiding incomplete treatment is one way to avert complications and relapse of malaria. Acute lung injury, renal failure and co morbidity are some of the factors behind deaths in cases of malaria caused by Vivax strain,” Awate said. 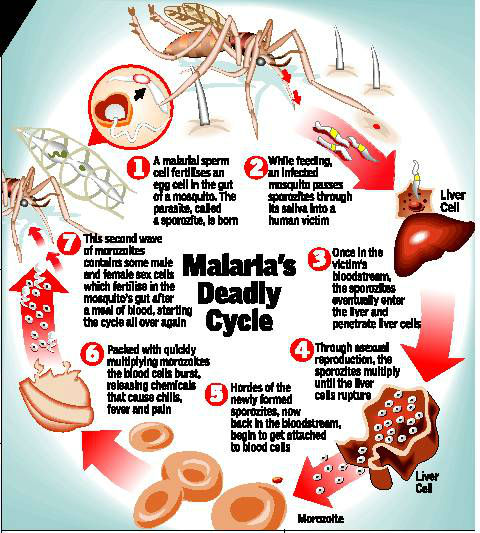 
ä It is the most severe form of malaria ä Can be fatal if treatment is delayed beyond 24 hours after the onset of clinical symptoms ä Young children, pregnant women, people who are immunosuppressed and elderly travellers are at risk


Disclaimer: The news story on this page is the copyright of the cited publication. This has been reproduced here for visitors to review, comment on and discuss. This is in keeping with the principle of ’Fair dealing’ or ’Fair use’. Visitors may click on the publication name, in the news story, to visit the original article as it appears on the publication’s website.